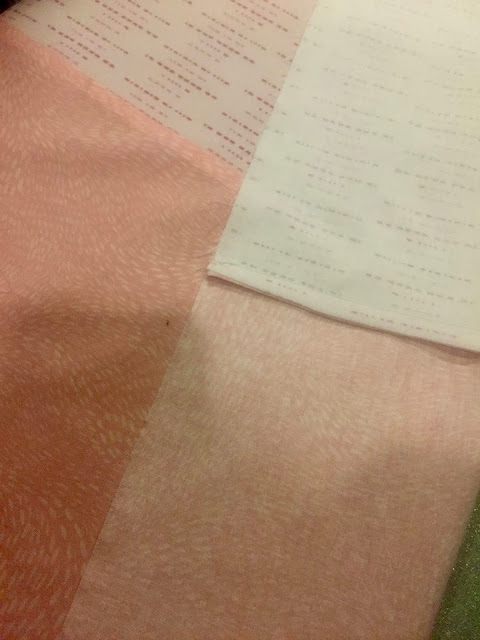 I've been working on the duvet cover I'm making for my daughter's birthday gift (a weighted blanket). I want to be able to give it to her on Thanksgiving next week, so I'm buckling down to get it done. Since it'll likely get washed a lot, I've taken the extra time involved to do French seams. I was very out of practice, but it really is easy and looks so nice when it's finished. 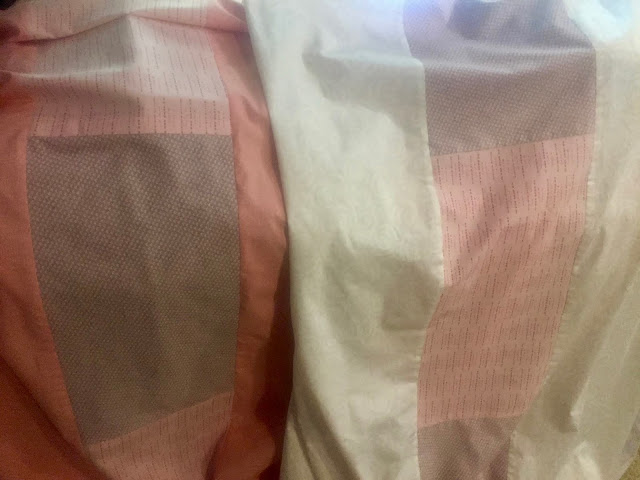 Here's how the two sides look now that I've gotten them sewn together. The fabric that looks white is a pale pink with white circle-ish absract batik roses. I thought having one side be lighter than the other would be nice so she can have some variation in how her bed looks with the blanket on it. 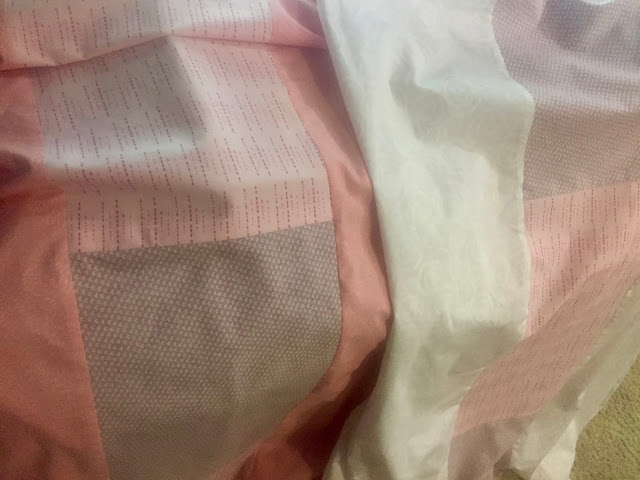 Wandering Wednesday: My Own Backyard 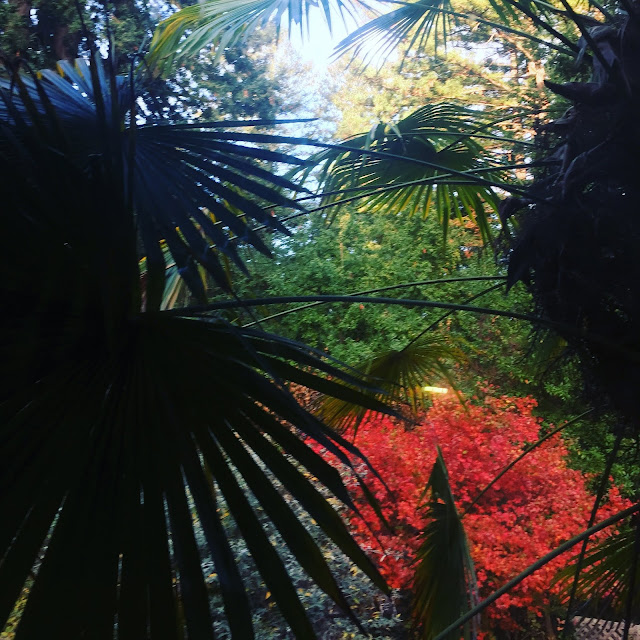 Our Japanese Maple has finally decided it is indeed Fall. This is seen from my studio window through the Improbable Two Story Tall Palm. 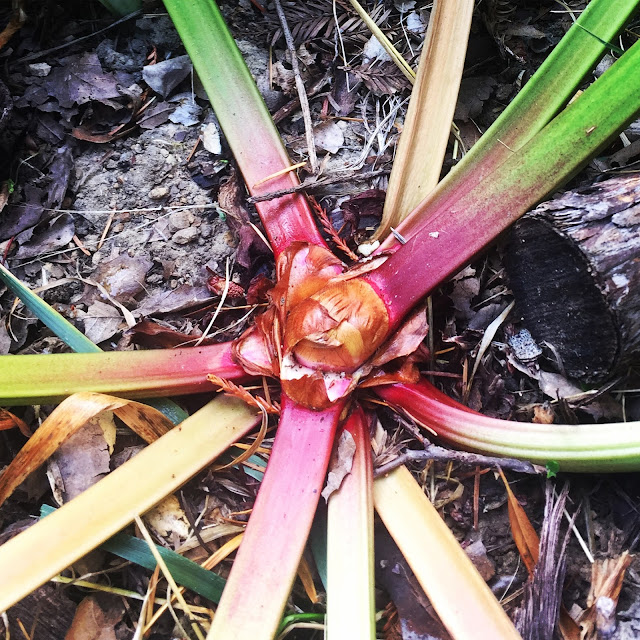 Rubarb is suddenly going again?! I was shocked, especially since it's barely gotten any water all this long dry summer. But there it is getting all pretty and pink again. Maybe enough to make a strawberry rhubarb pie for my husband's birthday coming up soon? 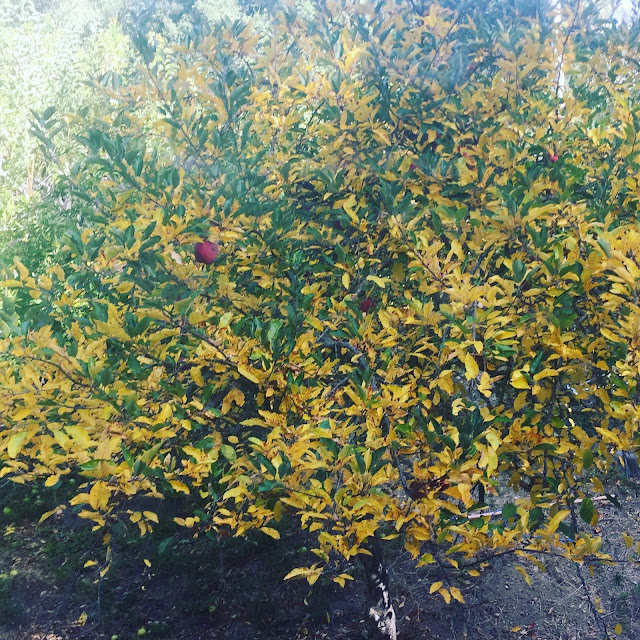 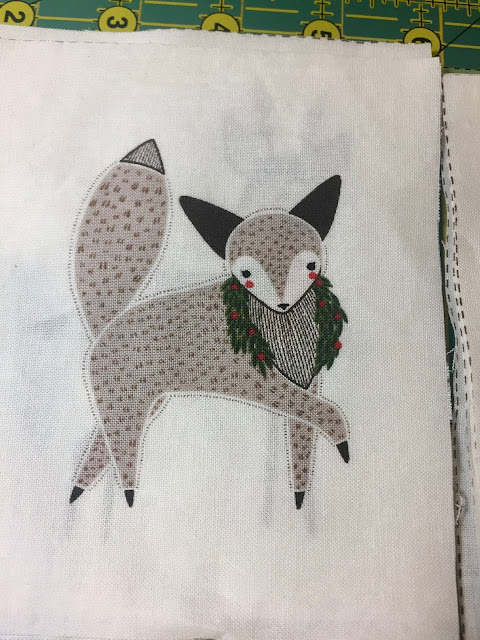 I cut out the pieces from the Merriment panel, and was surprised by how cute the ghostly antlers look on this fox. 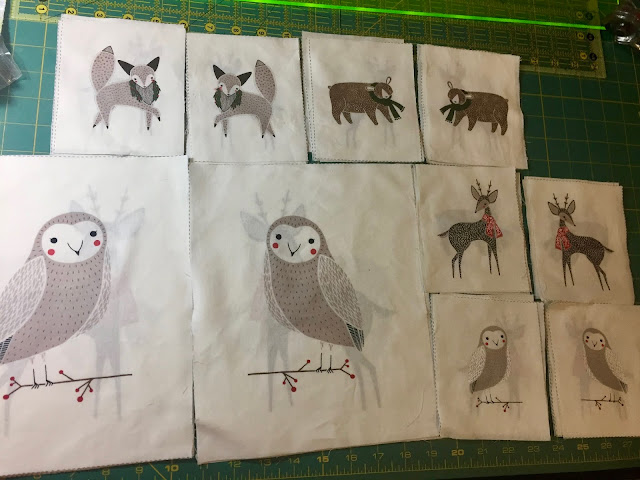 There are pairs of the animals facing left and right, and in two sizes also, so I'm playing with a design that will feature that left right thing. In my mind it would look a bit like the animals are talking to one another. But we'll see what I come up with. I'm also considering making the animal the center of a snowflake/star with some contrasting fabrics instead of just sashing them. 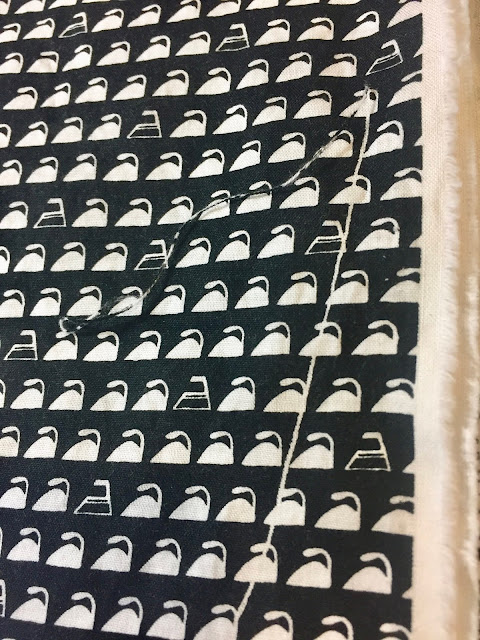 I was washing my new fabrics and then trimming the thready edges yesterday when I noticed this.  At first I thought it was a misprinted part of the fabric and a thread lying on the top that needed to be trimmed or brushed off. But then I looked closer and it was a thread coming directly from that spot. 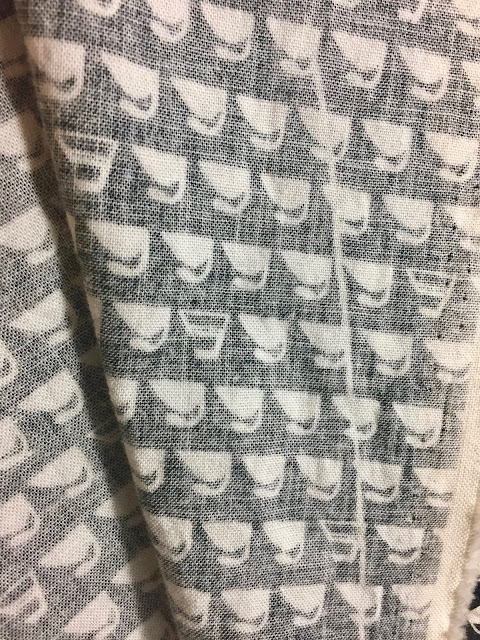 This is how the back looks. 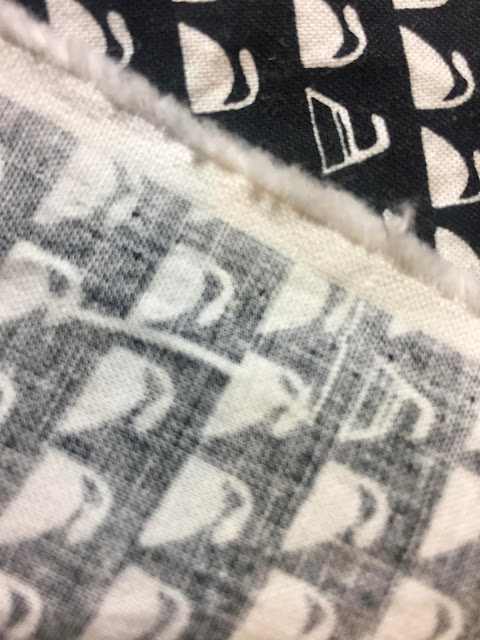 You can see that it leads over to the selvedge edge right there like a little almost dotted line.
So either a pulled thread on the existing greige goods when it was going through the printing process, and it essentially acted as a resist. Or maybe a pulled thread from the selvedge somehow pulling out the design? I think it's the first one, because the fabric feels smooth to me, not like there's a thread missing. But then I look at the back and it's clearly something to do with the threads of the fabric themselves.
Who really knows, but it's an oddity, usually the fabrics are pretty darn boring and predictable.
Weird, huh? 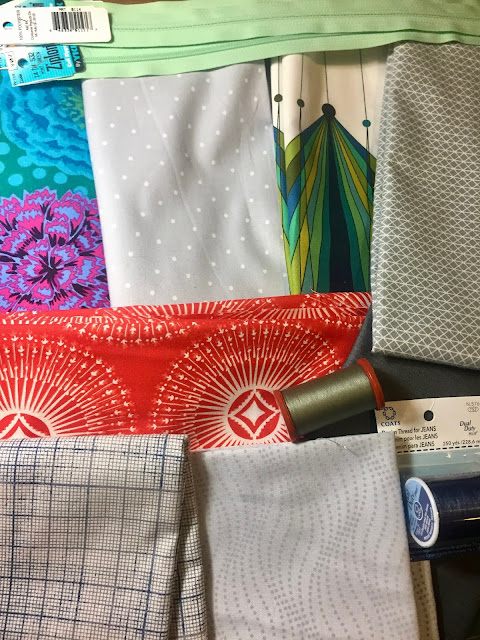 On the hunt for some of the fuchsia polka dot fabric for the back of my Kaffe Blue Squares quilt, I found some other things instead at two LQS. At least several were from the sale table. The green upholstery thread and zippers are for the green couch cushions I'm working on, one of the items on my Finish-a-Long list. I was unable to find any. So now, I get to decide whether to do a little rippit-stitching and replace the fuchsia polka dot fabric with the fabric in the upper left corner, or order some of the dots fabric online or just use something else for the binding.

The fabric on the upper right hand is a strange blue almost grey, it really depends on the lighting to see the color. So that will be fun to try to use.

Maybe with all these greys or almost greys I've been buying I should put them all in one quilt to fight each other. No I'm grey! No I'm grey! No I'm Gray! etc. I will call it "The Battle of The Greys" or maybe "Gray vs. Grey". This will be in honor of a friend from high school, a trombone player and his first name was Gray but Not Grey as he always had to correct people. I always felt badly for him having to constantly fight just to have his name spelled the right way.

When You're A Wildcat 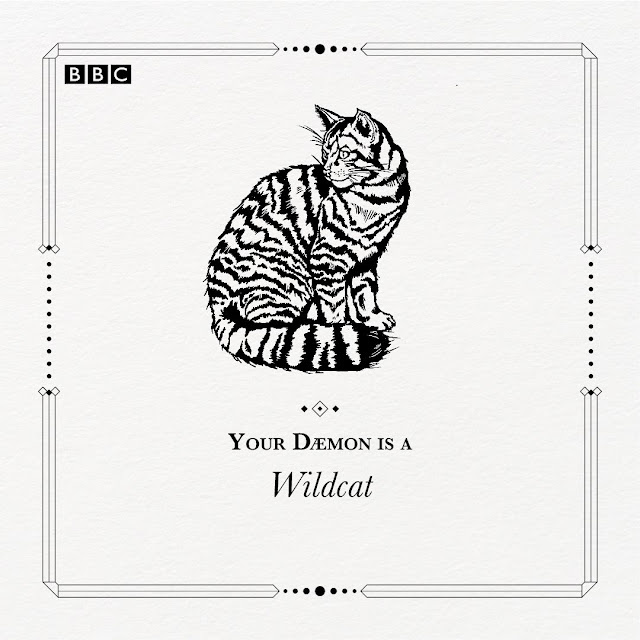 According to the quiz, My dæmon is a wildcat.

"Your decisions have led you here. Your daemon is the wildcat. You are independent, brave and logical. You have an unquenchable thirst for knowledge and are extremely diligent. You weigh up your options without acting impulsively, but you never let this get in the way of a good adventure! You take your responsibilities seriously, acting with great care and tact. You are very protective of those you love and have a great desire to do good in this world."

I can't wait to start watching this BBC/HBO series made from one of my favorite book series ever, His Dark Materials by Phillip Pullman. In the stories, everyone has a dæmon which can take many forms of various animal until it settles on being just one animal when you hit puberty. In some sense, a dæmon is like an external manifestation of one's soul. It's one of the most captivating and inventive things I've come across in a lifetime of reading fantasy and science fiction. I really hope that the show is well done, this is such a timely story for the days we currently find ourselves living through.
Posted by Julie Zaccone Stiller at 11/12/2019 04:31:00 PM No comments: 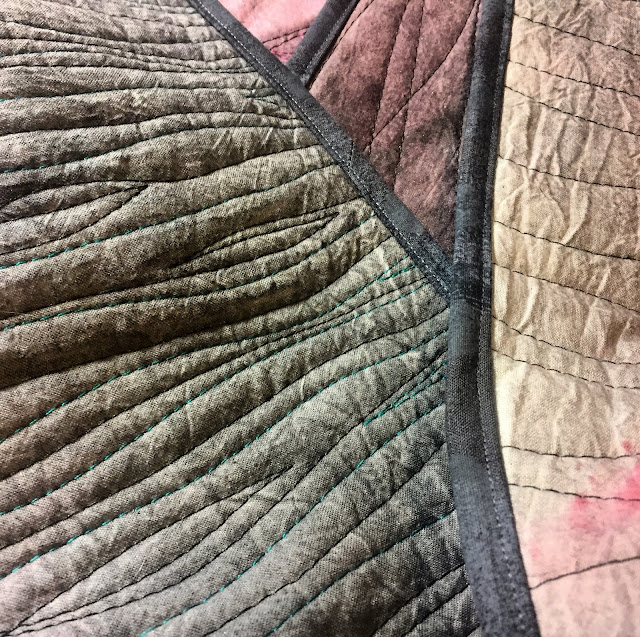 I made the plunge and squared up a very large wall quilt I've been working on for a very long time. It was quite askew, and it wasn't going to hang well because of that. So cutting it down to an actual rectangle meant giving up some of the image. I actually like it better now, so that's good, phew. 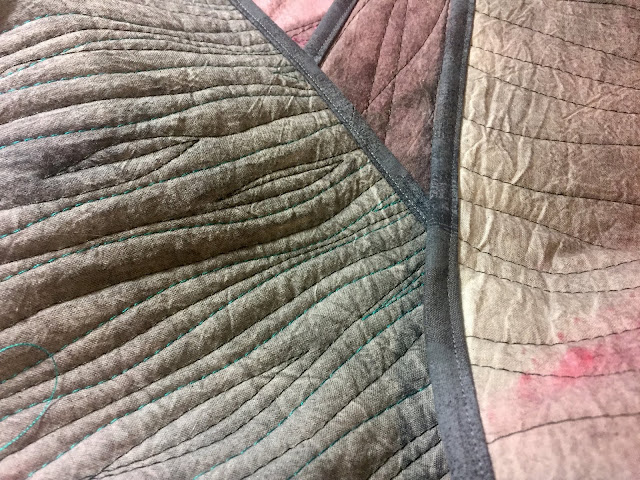 I had already made the binding so it was easy to get it sewn on to the quilt. The dot grunge grey fabric that I chose really did work well with the color variations in this piece.
These pictures show the texture from both the quilting and from the layers of Setacolor paint. 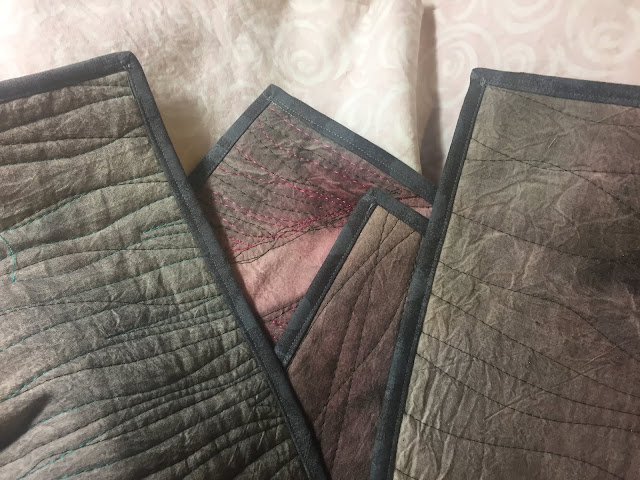 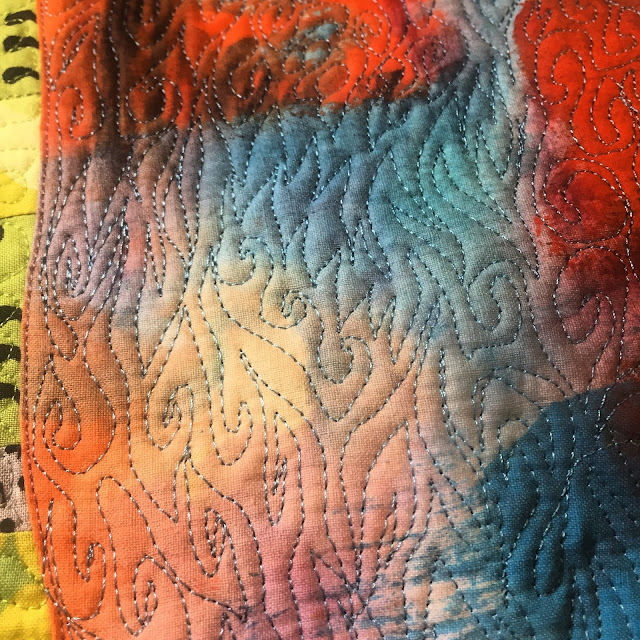 Had a Saturday Night Stitching session last night and got the free motion quilting done on one of the smaller projects on my finish a long list. Even though I'm still a little rusty, I'm pleased with how the stitch length is coming out, and how my improvised designs are working out.

Next up on this piece is doing a binding of some sort, maybe a facing, and also putting on some embellishment, perhaps beads. It's been a while since I've done beading on a wall quilt.
Posted by Julie Zaccone Stiller at 11/10/2019 10:50:00 AM No comments: 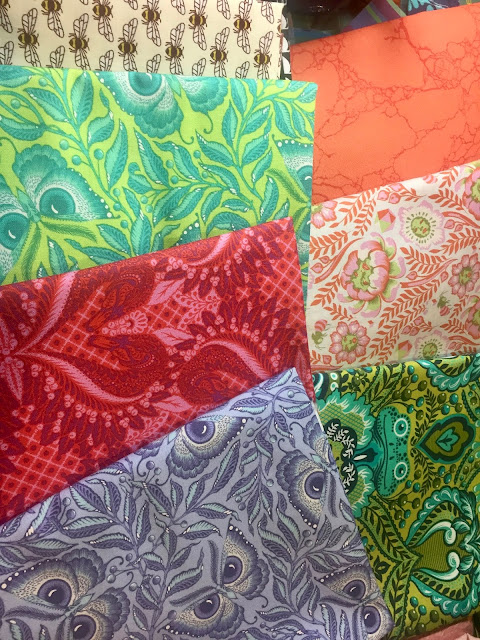 Bought some older Tula Pink fabrics on big sale from I Love Fabric, they're closing down and selling off the remaining stock. Maybe there will be some fabrics you need on their site.  I'm going to be using all Tula Pink fabrics to make a border for my City Sampler to bring it up to king-size so I can use it on our bed.
There are also two others in here that are non Tula, the bees, and one with irons that's hiding under the bees.
Posted by Julie Zaccone Stiller at 11/09/2019 06:30:00 AM 2 comments: 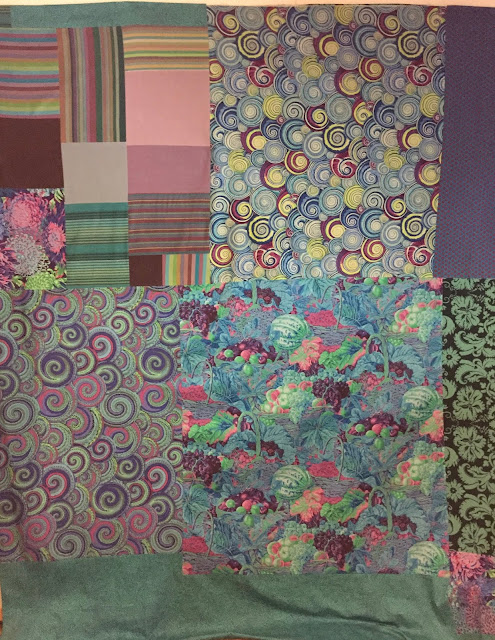 Got the back pieced together for the Kaffe Blue Squares done. Only to find that the binding I made is too short. And I used the last of the polka dot in the upper right hand corner there. Sigh. 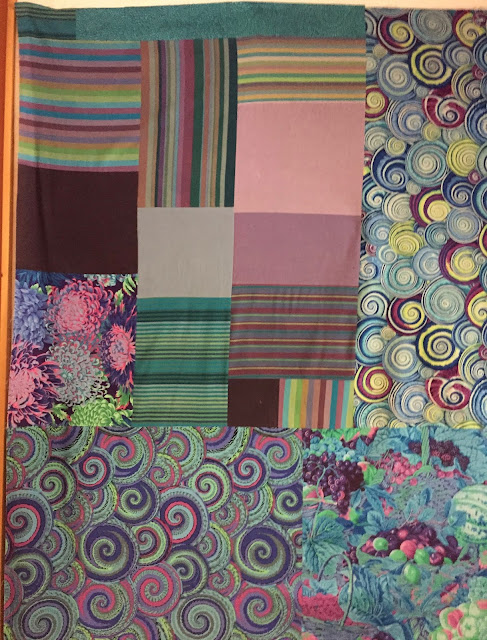 I really like how this corner turned out with the stripes and solids. 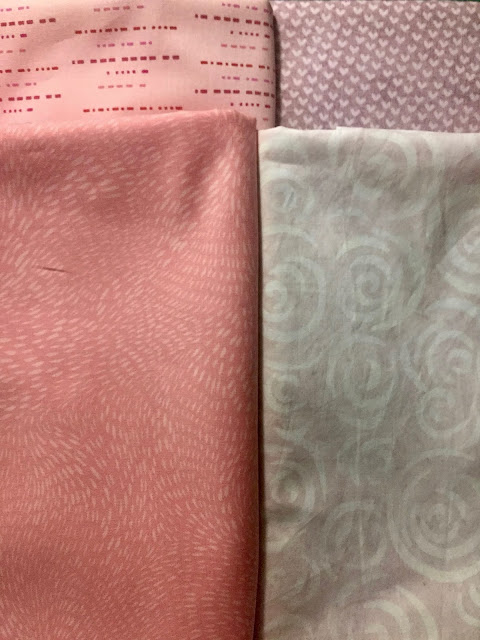 We gave our daughter a weighted blanket for her birthday last weekend, and I offered to make her a duvet cover for it as it's not washable. She asked for pink, so I had her go through my box of pink fat quarters and pick ones she liked. I made a little swatch card and took it to my LQS and found these fabrics. The two fabrics on the right will be on one side and the two on the left will be on the reverse. That's the plan as of now. 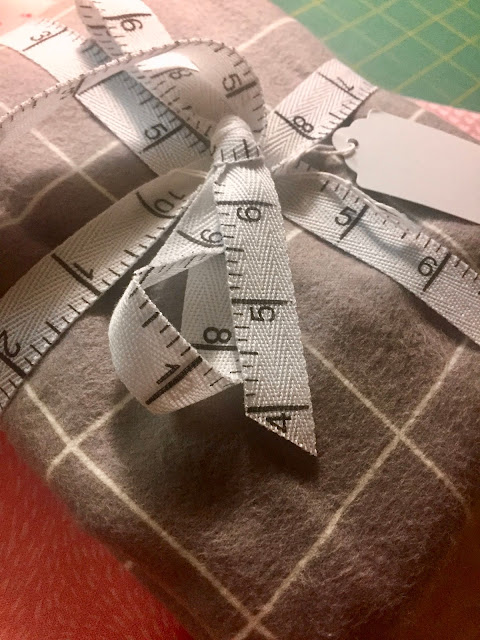 The store I went to is the local Kaffe Fassett place, and so they carry his design wall flannel. I bought a piece to try out. His comments on using a white design wall go something along the lines of "How can you see anything, it's like looking into a snowstorm?" I'm not sure if I'll like the white lines, but I do like the grey. I'm going to pin it up onto my all-white design wall and take some comparison pictures of a project side by side to see if I see a difference.
Posted by Julie Zaccone Stiller at 11/06/2019 09:29:00 AM 2 comments: 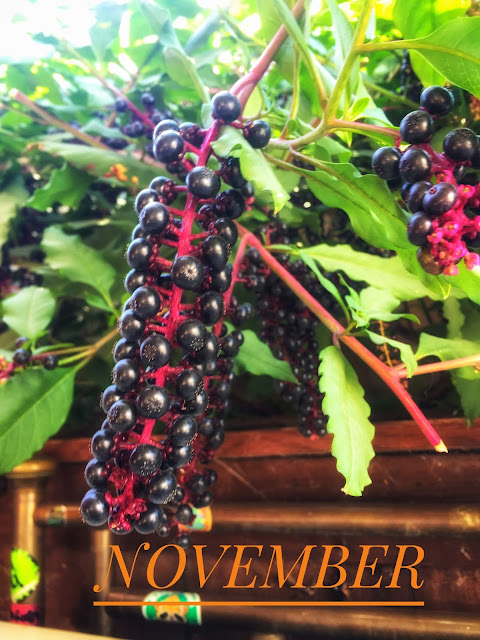 Onto the month of November. Already?
Ready for all the family birthdays this month? Almost.
Ready for Thanksgiving? Getting there, bought a gravy boat so there's that.
Ready for some quilting? Yes please.
Posted by Julie Zaccone Stiller at 11/04/2019 09:10:00 AM 3 comments: