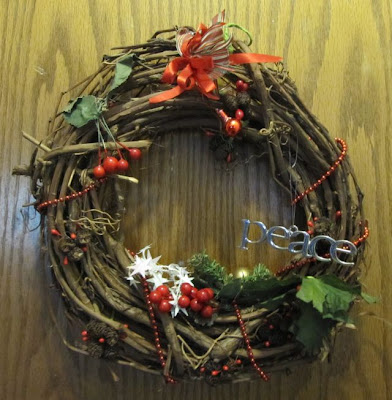 I can't believe it is the very last day of the year! This year has gone by so quickly it seems to me, and 2010 is here already. (doesn't that sound soooo futuristic?!) I hope that you've had a lovely holiday season and enjoy some festive fun this New Year's evening.
It has been more than a month since I've blogged here, a very long break for me, but it was unfortunately necessary. This hand surgery recovery really was much harder than I had imagined. There have been many many times I've wished I had not even had the surgery or that I'd just broken a bone instead (much easier recovery!).
It was a pretty depressing December because of the pain and forced inactivity and I just didn't want to blog all about that. I didn't want to think about it, much less write about it, and I figured you wouldn't particularly want to read about it.
I also felt very inauthentic posting anything happy or creative because I wasn't, and it felt like lying. I had to pretty much just ignore Blogland altogether because it made me even more depressed about all the stuff I couldn't do or make or try or participate in. 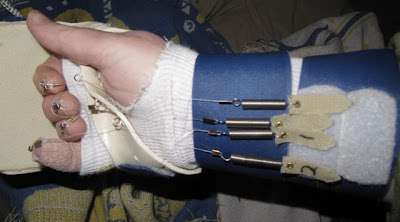 This is the rig I was in for 4.5 weeks, it is called a dorsal blocking splint and the main purpose was to not allow me to straighten my repaired tendon before it was healed enough. The hooks were superglued to my fingernails with little fishing line/spring/velcro cords to use for bending my fingers. I was part machine for a bit there! The blue straps were this industrial strength velcro which wrapped the whole thing around my forearm. 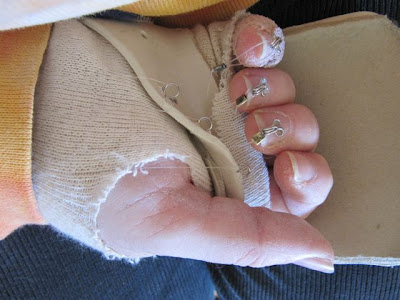 Then after those long 4.5 weeks I got my forefinger back and could pinch stuff, which helped with wrapping Christmas presents and driving.
And as of yesterday I'm completely out of the splint and able to type two handed for a little bit at a time. And I have used my scissors and sewing machine exactly once (to repair a sweater for my son, don't get too excited!). As of now, I am only supposed to lift something as heavy as a soda can. Did you know most of your grip strength is in your pinky and ring finger?
There is a long way to go with hand therapy before I'll really have the full use of my hand back, and I'm not sure it will ever be the same again. It will be a lot better than now though and that will just have to be good enough. I'll learn to deal and adapt. And I'll never ever take my hands for granted ever again. 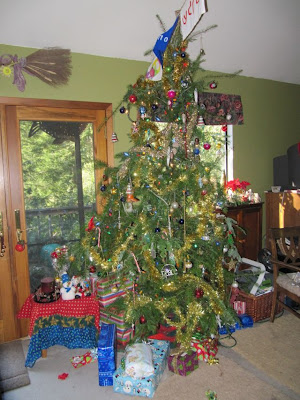 I'll leave you with a picture of our Christmas tree/Hannukkah Bush before it "fell over" (no one quite knows what happens, but I'm pretty sure it was one of our cats). Luckily it was after we'd opened most of our presents. Only a few got really soaked and had to be re-wrapped before we could give them to relatives we were to see over the next few weeks. And not too many ornaments were broken which was a good thing. Usually we anchor the top somehow, but it didn't happen this year. 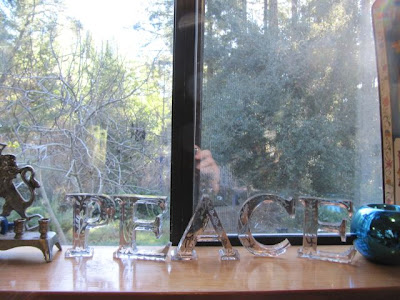