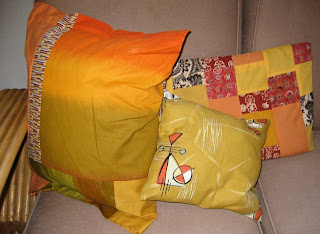 I was sorting through some fabric today and came across this faux bark cloth "atomic" print. (Faux because barkcloth is definitely not cotton nor is it polyester or silk or whatever the heck this is made out of!)Anyways, it was just the right size for recovering an old throw pillow that has been hanging around bugging me on the studio couch. Here it is cozying up with the other two pillows that I've whipped up in various shades of alarming orange. I always liked that kind of print design, felt like I'd missed out on the atomic 50's being a 60's baby and all. So it is fun that it comes back around once again. Plus the texture of bark cloth is always fun, I like seeing it next to the more prosaic cottons and cotton/poly twill here. I was just googling to see if I could come up with a fun atomic retro barkcloth resource, and here is Retro Fabrics by Melinamade, cool!
Labels: home sewing, pillow
Posted by Julie Zaccone Stiller at 1/18/2008 11:51:00 PM 2 comments: 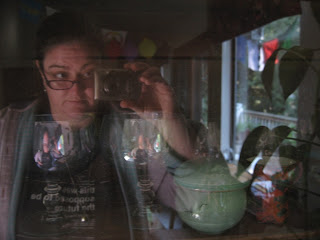 Here I am Celebrating a new camera! Just 10 minutes ago my refurbished Canon SD900 arrived. Hooray!!
And I assembled it, and snapped some reflective pics. I'm psyched that the battery came already charged!.
This is the replacement for the SD600 that bit the dust on the way to holiday celebrations. Poor thing couldn't retract the lens. I was going to just have them fix it, but it was only about $30 more to get this refurbished new super zoomy model. Woohoo 10 megapixels, watch out! The screen is enormous. And there are some new buttons, so I may actually have to read the owner's manual...
My first post for SelfPortraitChallenge this year. Did you see all 3 reflections of me??
Posted by Julie Zaccone Stiller at 1/16/2008 10:17:00 AM 3 comments: 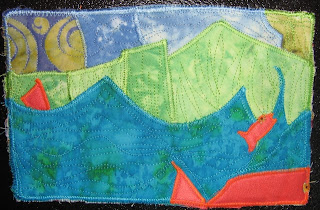 I made this little quiltlet a while ago, back when I took a class from Pamela Allen at EBHQ. We were to use our scraps and make something with a fish, in 5 minutes. Thus, the 3 fish.
And it sat there and sat there in my notebook for half a year until it got uncovered when I was tidying up. I noticed it was about to fall apart as it was just gluesticked together. So I quilted it, and now it is a little postcard sized quiltlet.
Posted by Julie Zaccone Stiller at 1/15/2008 01:33:00 PM 2 comments: 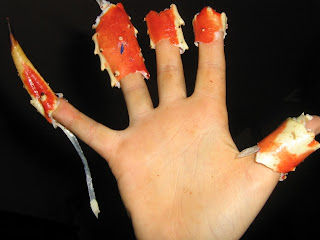 Sometimes you just have to Celebrate! With a New Year crab of course, it being the season for it and all. And when you're done digging out all that succulent meat, it is hard to resist making something out of the leavings. Let's just say that the cats were following around a certain someone for quite a while after this funny picture was taken. I was worried they'd be pouncing on him during the night and chewing on his fingers.. Turns out it is hard to get the crab scent off the skin once you've donned the shell and worn it around the house for a while. Never boring around here, letmetellyou.

I did make my traditional lentils and sausage (the Italian version of blackeyed peas for New Year's Day), but it got eaten up too quickly before I remembered to snap a picture. It wasn't particularly beautiful, but it sure was yummy. The lentils represent coins, aka abundance, bounty, lots o' moolah. Sounds good to me!

The other tradition for New Years' around here is blindly choosing a word out of the bag and then concentrating on that word for the year to come. We have this list that we got from Lunaea years ago, and all four of us choose a word. Mine this year is DISCIPLINE. Everyone else got nice and easy fluffy-bunny kinda words, not me man, I'm all about the hardline, hard-core stuff this year. I was feeling kinda negative and down about it really, like I need any help whatsoever beating myself up with my slack-i-tude and sluggish production...Then my friend and sister-priestess Rue posted her new year word with the visual thesaurus. Wow did that ever turn me right around. I hadn't thought to look up the word at all, just went with negative immediately, and I was really glad to have investigated the meaning(s) of the word.

Yes, of course there are some negative definitions to the word discipline (punishment, correction to gain control or enforce obedience). There are some neutral ones like system of rules. But then there are some much more positive leaning defnitions such as training (by instruction or practice) field of study, bailiwich, branch of knowledge and my favorite training to improve strenth or self-control. Well who doesn't need that?! Of course I do, probably everyone does, right? So, armed with a new spin on things I'm now much happier with the word that will help define and shape my year to come.

Luckily I had already signed up for Gabrielle Swain's Creative Sparks class which runs for the first six months of the year. And she strikes me as someone who really *gets* discipline as it applies to the life of an artist. Already she's got me working in my studio everyday (must show up!) and that is a huge deal compared to last year let me tell you! So I guess I was already primed for this year to be one founded on discipline.
Posted by Julie Zaccone Stiller at 1/14/2008 10:35:00 AM 2 comments: 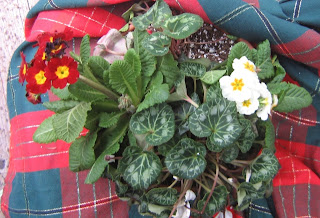 Here are some festive holiday flowers outside on my deck. The tartan used to be our tree skirt for the Christmas tree, but it still smelled of "cat" from last year no matter how many times I washed it....so it is now an outdoor table decoration, which still looked nice even through the pounding rain. It is great during the dark season to be able to look outside and see something so bright and cheery.

Originally I bought these primroses and cyclamens to have indoors as a floral display. But then I realized they would be happier outside and I would be happy to see them blooming out my window. I jammed them all into one pot and they seem pretty happy together so far.

I never got around to getting a poinsettia or a rosemary tree this year, just still too crowded in the house. I also never made a greens wreath for the front door, maybe I'll still do that since it smells so good, as I use bay,redwood, rosemary and lavender from my garden.
sigh.
So many undone things. But that is ok. Doing what I do is enough. It has to be.
Posted by Julie Zaccone Stiller at 1/11/2008 07:22:00 PM No comments:

Working with No Power 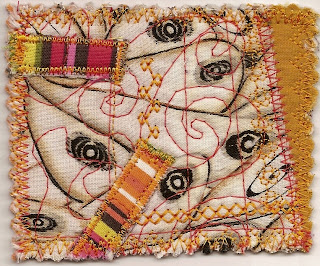 Yes, I'm still working on stuff, in the intermittent dark of no power. Very hard to get going when you don't know what tools will be available to you. But I'm trying to be flexible, using collage and sketchbook when the sewing machine and iron aren't available.

Sure enough the promised storms were actually as bad as predicted, I didn't believe the weather guessers, so I wasn't quite ready! But after living in the rural mountains since 1990, we finally have a generator after much driving around by the man on the mission who is my husband. So that is good, especially if you don't want to try and eat the entire contents of your refrigerator and freezer all at once. Luckily I had a 20 pound turkey in the freezer so that kept things nice and cold in there. And the boys weren't too put out about having to devour the ice cream in a day. We did lose some milk and eggnog and leftovers. No big deal there.

These are two teeny tiny quiltlets 3x4" or 3x5", something like that. 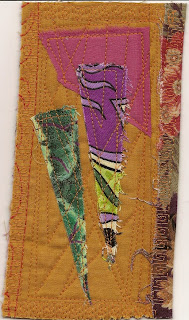 There are two more but my scanner decided to stop scanning the entire item. sigh. And my digital camera is broken too! It is in the repair center, hopefully they'll figure out why the lens wouldn't retract. sigh. Not doing so well with the electronics at the moment. Oh and my mouse stopped working too. Just the left button. Time for a new one I guess! 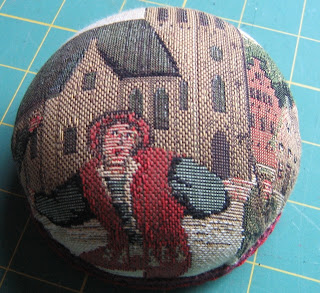 Check out this cool pincushion I received as a gift from a friend this past season. It is from England and I just love it. The guy looks so worried, like he's about to be stuck with a pin!
Posted by Julie Zaccone Stiller at 1/08/2008 09:30:00 AM 1 comment:

The Sun is a Ball of Gas 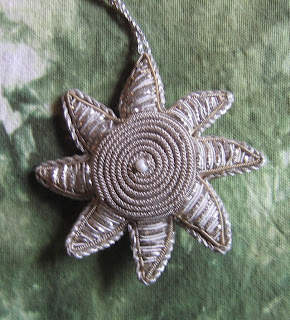 Here is a much better picture of the sun/star ornament for Deirdre.
I really like this shape quite a lot. It is almost a flower, and it has my favorite spiral motif too. And upon closer inspection it isn't beaded, except for the one pearl in the very center. All the rest is metallic cording of different types, mostly sadi thread. That reminds me that I have some sadi thread that I never used, hmmmm, this gives me some good ideas. 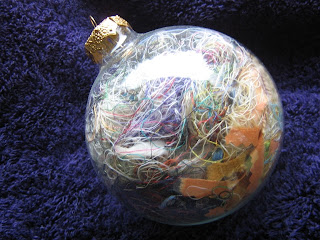 Here are a couple shots of gifts that I made for friends. They are normally called "witch balls" and are believed to keep evil witches away. Haha!They are created with the intention of tangling up any and all bad stuff headed towards you, keeping it ensnared within the ball following the tangled threads and sharp broken needles and pins. 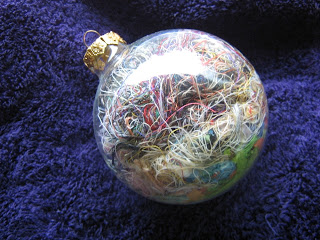 I made an extra one for myself and am trying to decide whether to hang it up by my computer workspace or my creative workspace.
Posted by Julie Zaccone Stiller at 1/03/2008 12:19:00 PM 4 comments: 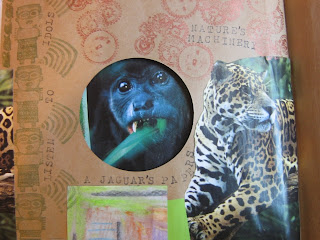 I just finished up my work in the rainforest book in the True Colors collaborative that I'm participating in. There are a few more months and books to art up.
This was a really cool book to work in as it was formerly some type of an LP record holder, with the sleeves bound in on one side.
Each artist gets one sleeve pocket with a piece of watercolor paper to work on.
This is what one side of my sleeve looks like. I mostly used stamps that I thought were rainforest-y or jungle-ish to go with the jaguar and monkey magazine pictures. The images brought to mind some funny word pairings "listen to idols", "a jaguar's papers", and "nature's machinery." Something about the intricate processes of the rainforest evoke machinery to me, I think that is where that one came from... 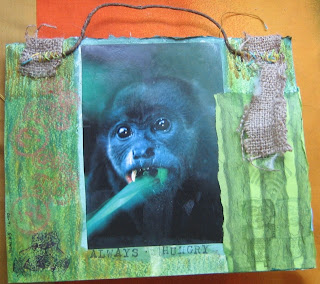 Here is the page pulled out by the cinnamon bark wrapped wire handle that I added. Along with the same stamps repeated, watercolor crayon background, special stripey paper, and hand sewn on with sashiko thread burlap. This one is titled "Always Hungry". 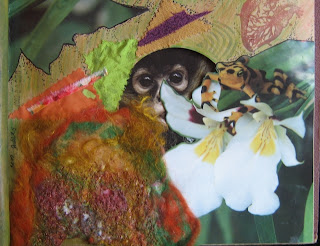 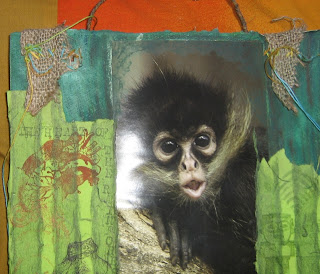 "The Heart of the Rainforest" is the reverse of the pullout, this one has a nice juicy orange/red heart stamped on. All the photography imagery comes from an Americas calendar (from way back in last year! haha) .
Posted by Julie Zaccone Stiller at 1/02/2008 11:53:00 PM No comments:

Some final holiday pictures, and me wishing you happy days of Peace in this newly born year. 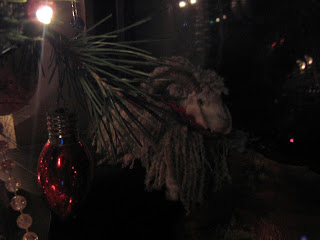 The holiday sheep hiding on the windowsill behind the funky tree. 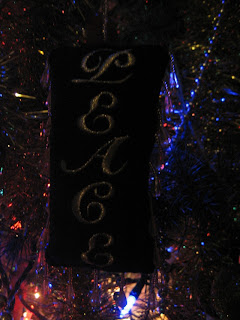 A stuffed and beaded and embroidered purple velvet ornament. 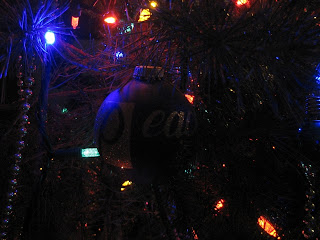 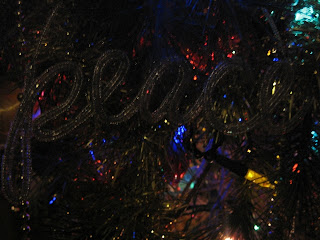 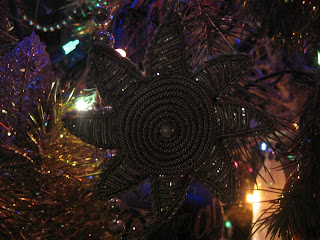 A silver beaded sun.
And a song I was thinking about and heard recently, here's a video of it: