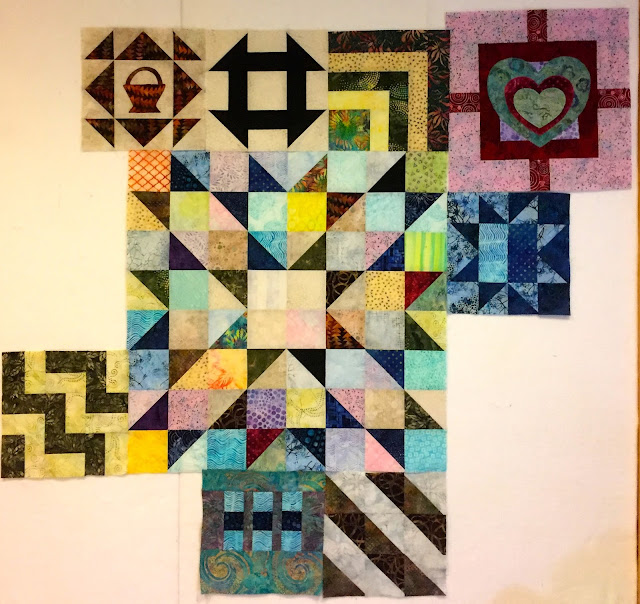 The ninth weekly Solstice block was a really big one, 32" square. It was a whole lot of HST's (Half Square Triangles) but at least they weren't teeny tiny for one of those 6.5" blocks for the City Sampler. 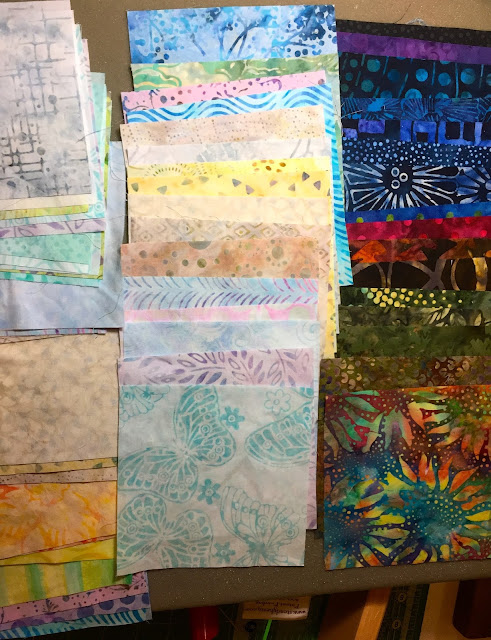 Here's how all the squares looked when I cut them out. I had to count the darks, mediums and lights several times to make sure I'd cut out enough. 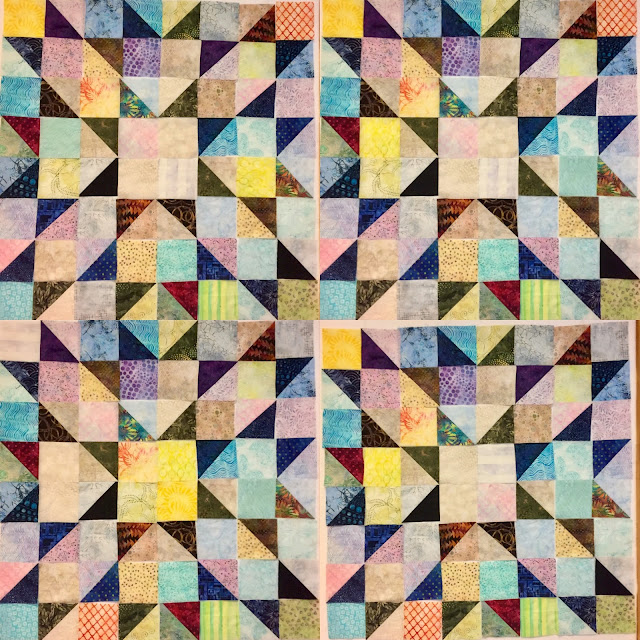 Once all the piecing was done, choosing how to lay out the block was the fun part. I tried several arrangements out, and tiled them together. This gives a good idea of how this one block could make a pretty great quilt top all on its own. 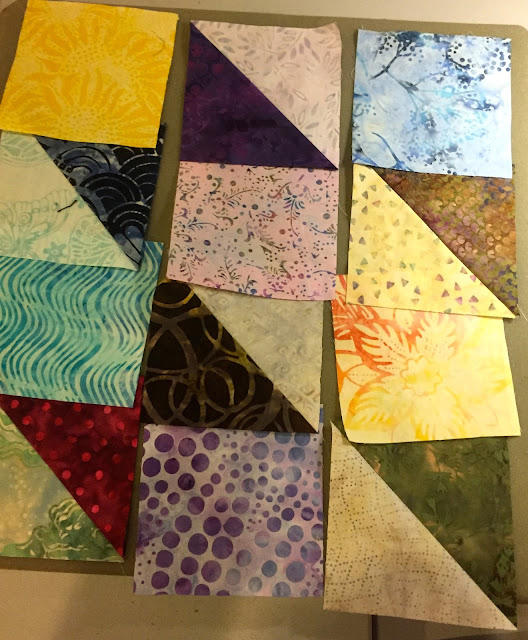 I sewed it together in sections, taking the layout in chunks from the design wall over to the sewing machine to keep the pattern straight. 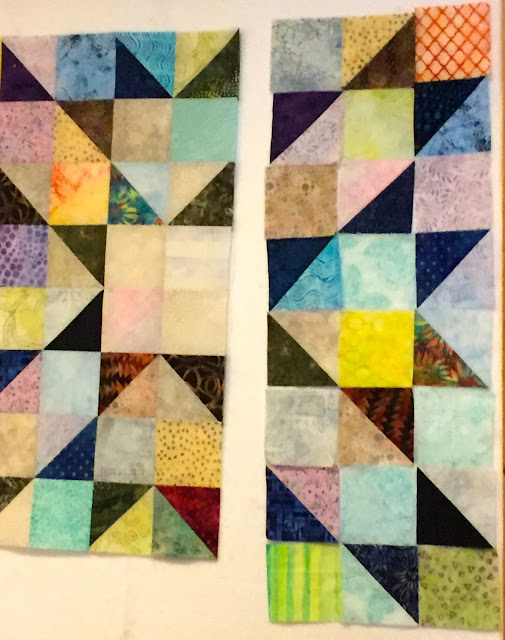 Eventually it all went together very well. I'm pleased with how the whole thing looks when all the blocks are together.
Posted by Julie Zaccone Stiller at 3/04/2017 06:30:00 AM No comments: 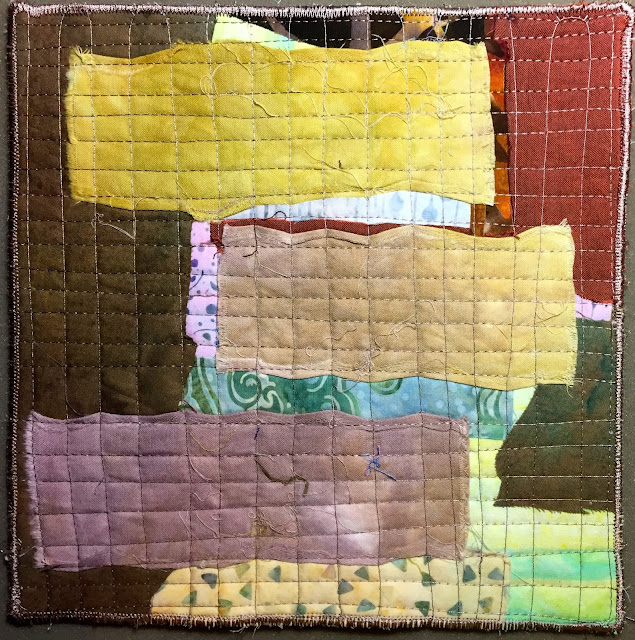 The twenty-ninth Weekly Study Square Quiltlet was made during one of the darkest, rainiest weeks I've ever experienced here in the mountains. The colors chosen reflect that I guess, mud mud mud everywhere. 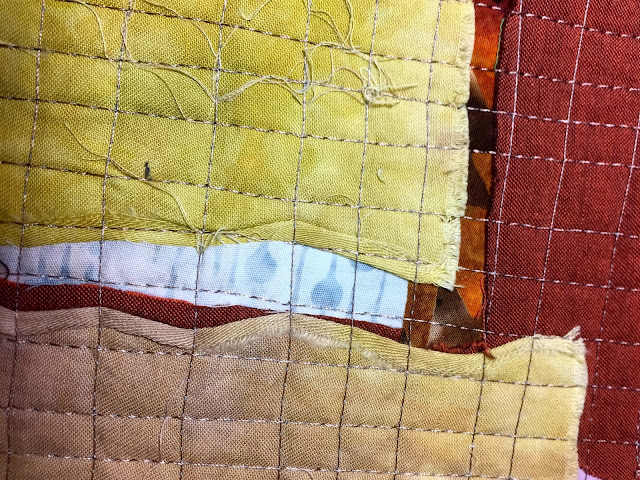 A stitched grid contains the scraps. 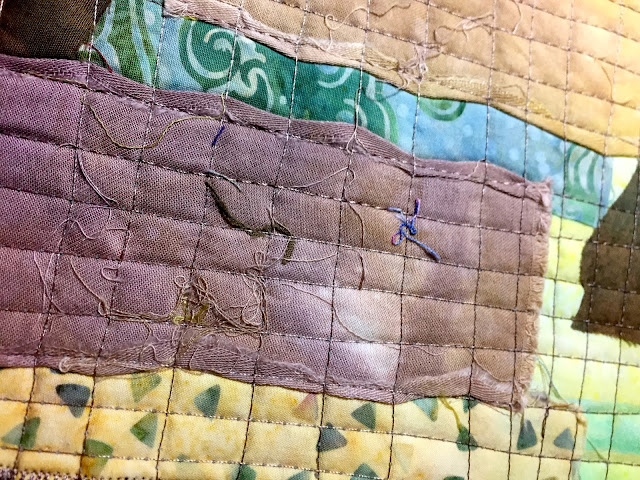 I like the way the batiks and the hand-dyes play with each other. In this close-up you can really see how different the surfaces of the two types of fabric reflect the light.
Posted by Julie Zaccone Stiller at 3/03/2017 06:30:00 AM No comments: 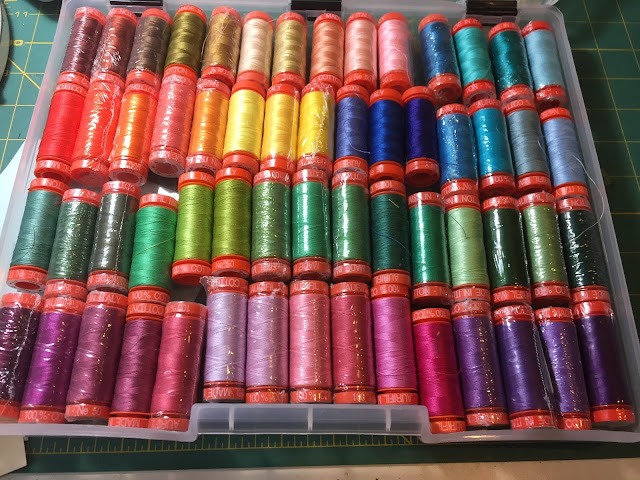 Threads have been on my mind lately. Maybe it's because of the new Aurifil I've been collecting thanks to the Cotton Club's monthly collection. I think I might have enough now, far short of the 236 colors available, but wow is this ever nice thread! At first I figured it was all hype, but nope, this is the good stuff. But I had to think about how to store it, so I could see all the colors. I'm using a flat box that I think is intended for scrapbooking, but it fits perfectly. Now that it's all full I guess I have to call it quits on buying more. (or get another one of these boxes) 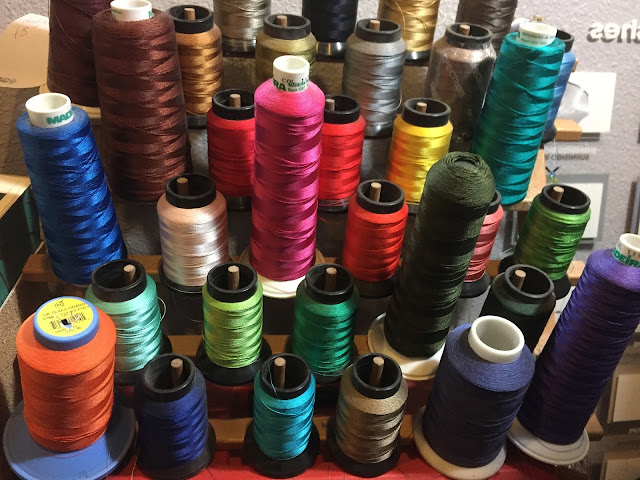 So I started thinking about how I store all of my thread, there's several methods that I use. I mostly divide them up by type of thread material. I store the bigger thread cones on this wooden wall rack. I love how this looks and it is very handy, but the cones do get dusty on the top and I do worry about the light fading them since a lot of them are rayon. I guess I could fashion some sort of clear dust cover that might help and attach it at the top. 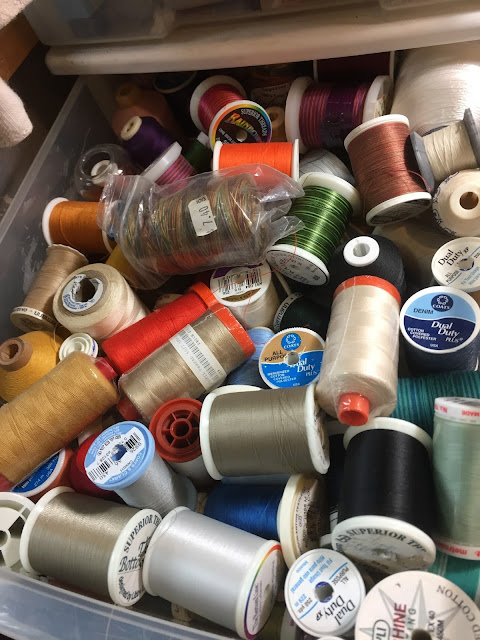 Here's one of the two jumbled-up plastic drawers of thread, this one holds all the cotton or polyester thread spools. It never behaves no matter how many times I sort it. So many different shapes and sizes of spools, impossible to organize. And probably too many in here too. 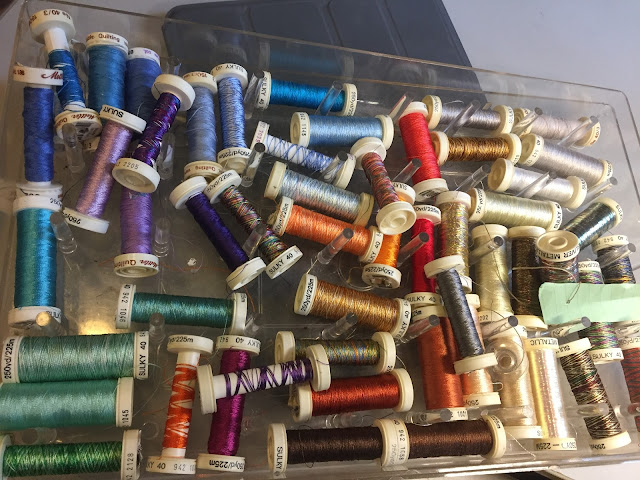 The Sulky box of rayons is getting less crowded as I use up all the little spools. I haven't bought new Sulky in quite a while now, not sure why? Out of fashion or maybe I've just been in using-up mode. The lid on this plastic box is discoloring with age now, but the threads still seem okay. Although those metallics are still so finicky to stitch with. This is a bad use of this box though because the Sulky spools don't fit standing up on the pegs, they're a smidge too tall. But I really do like seeing the colors of the threads, when I look in the box, it's easier to find the one I want to use. 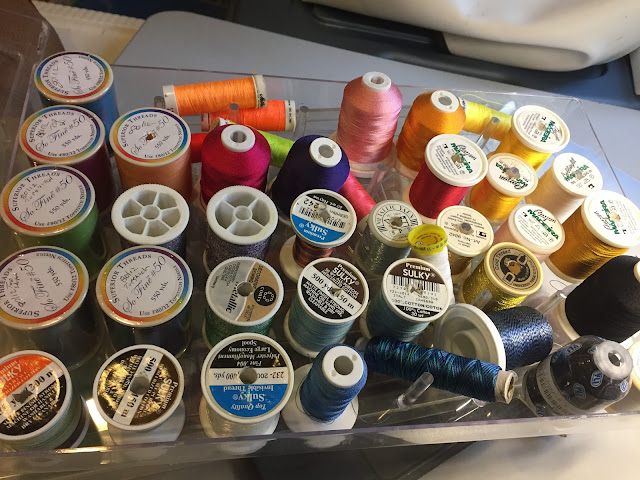 Here's the same type of box with larger spools, they're mostly upright on the pegs like they're supposed to be, but it's not showing the colors off for me on most of the spools.

Obviously, I have plenty, probably too much thread already, it's the plague of too-much, first-world problems, right?  When I look at it like this all in one place, I find that there's a historical, almost journal-ish quality to many of the threads in my collection, they mark different stages I've gone through in my quilting journey. So many techniques tried out, learned, dabbled with, discarded, a few mastered, and a lot of them have required very specific threads. Thus the variety. Spice of life even when it comes to threads apparently.